Today’s blog entry is sponsored by Flipsidegaming.com. Enter the code “HT10” to save 10% on your next order of $10 or more. They’ve got great deals on singles, sealed product, and even online codes!

Today we had some major changes released as part of Pokemon’s event rules and penalties, so I thought now would be the perfect time to give my assessment as both a player and a judge of these changes. Although I’ll of course inform you of those decisions, the majority of this entry is dedicated to analyzing those rules changes. It’s nice simply to “know” a rule; it’s another thing to put your knowledge into practice. So let’s put it into practice, shall we? 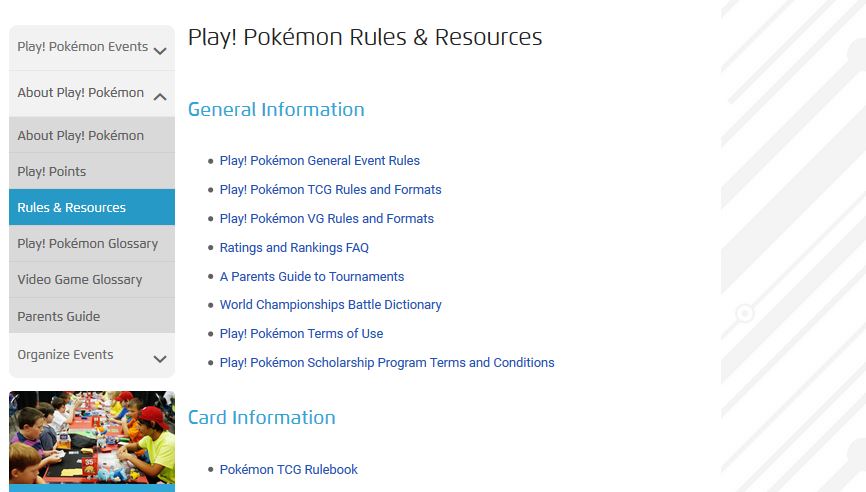 Pokemon.com has a nifty “Rules and Resources” page. As a full-time player and a part-time judge, I consider this to be one of the most valuable resources available to me for a couple big reasons:

1. It has a scan of the official rule book, and a surprising number of complex questions are actually answered inside it;
2. It includes important PDF files about event rules, penalties, organizing, and judging which are routinely updated.

Both of these reasons are enough to bookmark that link on your web browser, but this article is interested in updates to #2. Certain files, such as “General Event Rules” will have what’s called an Appendix, or an addition to the end of the file. Here you’ll clearly see Pokemon caring for our mental health, because each of these Appendices lists the most recent document updates. Neat, huh?

However, do keep in mind that not all updates will appear in the appendices. There’s actually at least one major change which did not appear in these end-of-document notes, which we’ll address shortly.

The Changes: Thoughts and Analysis 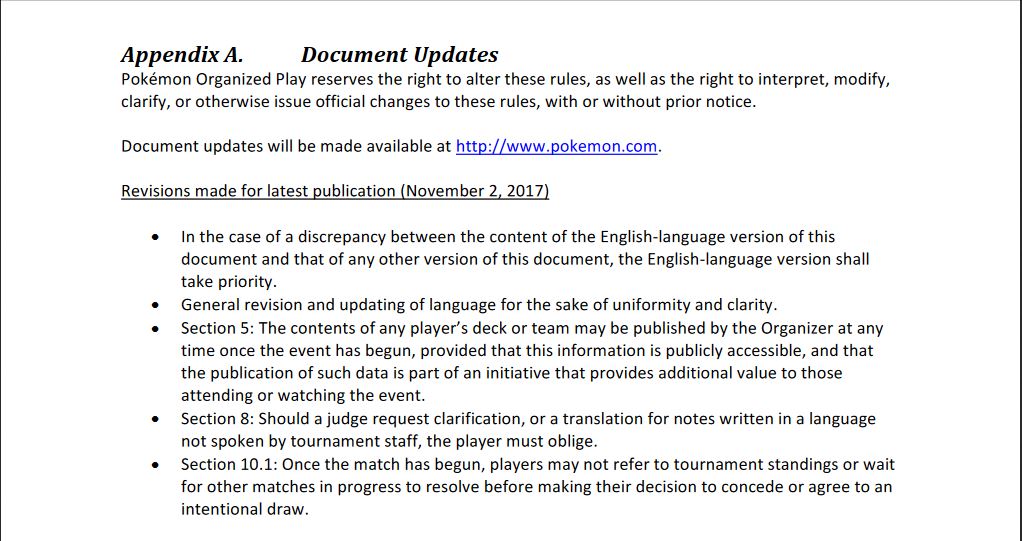 * That first bullet point, which you’ll see repeated many times in the updates, is insurance against translation issues.  Nothing too special about that unless you’re a foreign judge or organizer, which is actually a bit of a relief in case of crucial errors between the English version and your native language.

* I’m not 100% sure what the previous version said about list publishing by organizers, but this explains it quite nicely. Although it defaults to deck lists being confidential, be aware that the organizer is given pretty broad discretion to publish your list. They just have to make it publicly accessible (read: share it with everyone), as well as make it valuable to people attending or watching the event.

If there is a dispute over publishing lists, I feel the bar will be set very low for an organizer to justify their actions to Play! Pokemon. However, just because a TO can publish lists doesn’t mean that they should – especially during local League Cups where the value of a published list is low.  So if you’re an organizer, be careful when exercising this right; and if you’re player, report any inappropriate exercise of this ability to Play! Pokemon via event feedback or support tickets.

* Section 8’s change is just a slight clarification to note-taking – something you might have seen me do a lot of times on stream! Basically, be ready to translate your notes into a language the tournament staff speak and you should be fine.

* Section 10.1’s change is mostly ignored in the community right now, but is actually pretty important. Ever since intentional draws came back, there has been this uncomfortable timing issue where players who want to draw are waiting on other ongoing matches in order to make the most optimal choice.

Example: The Po Town City League Cup has six rounds of swiss for its Masters. Four people have at least 13 match points (four wins and a tie) and are all safe to make top eight by intentionally drawing for an extra match point. However, six people only have 12 match points, meaning their decision to draw or play depends heavily on the other players with 12 match points.

Regardless of how good you are at keeping track of your opponents’ win percentages for tiebreakers, if you’re the tie match in the third scenario, you’re in cut no matter how awful your resistance! It actually makes perfect sense then why some players would “start” a last-round swiss match while simultaneously keeping track of what went on at the other tables.

Despite how rational it may be, this is still a bad situation because it rewards players for gaming the system and not focusing on their matches. It’s also highly toxic because the implications of “stalking” other matches before an intentional draw can influence the way people play, or even negatively impact future events. I’m not here to cast judgment on anyone who has done this before – just be aware that there are good reasons why you can’t do it anymore.

***Players: This rule only triggers once the match has begun – you can still refer to standings/pairings when they’re posted, or to seeing who all sits down to play rather than draw. So if in the above example if you see four 12-point people sitting down to play, you can use that information to decide whether you want to draw with your own opponent.

***Judges/Organizers: Watch out, because no new penalties were added to cover this specific situation! However, it’s arguable the penalty guidelines already cover this newly illegal behavior under several sections – most notably 7.6, “Unsporting Conduct.” Since this behavior has a direct effect on the event “and” causes emotional distress, I’d actually argue that this would fall under 7.6.2, “Unsporting Conduct: Major.”

Analysis: I didn’t post a screenshot of these changes because there’s nothing too surprising – just set updates, redundant sections, and putting your deck list in order.

Analysis: This isn’t a PDF, but it is important because it directly addresses the infamously powerful – and infamously delayed – Tapu Lele promo:

Honestly this was a very big save by Play! Pokemon; otherwise you would have seen Tapu Lele legal early in Europe, which may have resulted in some bizarre metagame differences. Since the Expanded format is a very controlled, heavily monitored environment for the sake of game balance, they simply can’t let one part of the world play BLW-on with a card, while the other does not.

One last note before we move on, but I hope Play! Pokemon considers exercising this legality patch in case Tapu Lele’s English release doesn’t actually pop up in enough English-speaking markets. That’s because we had multiple instances during the Black and White era where niche to playable promos were seen in English all over international markets, yet nowhere to be found in the United States. Sad! 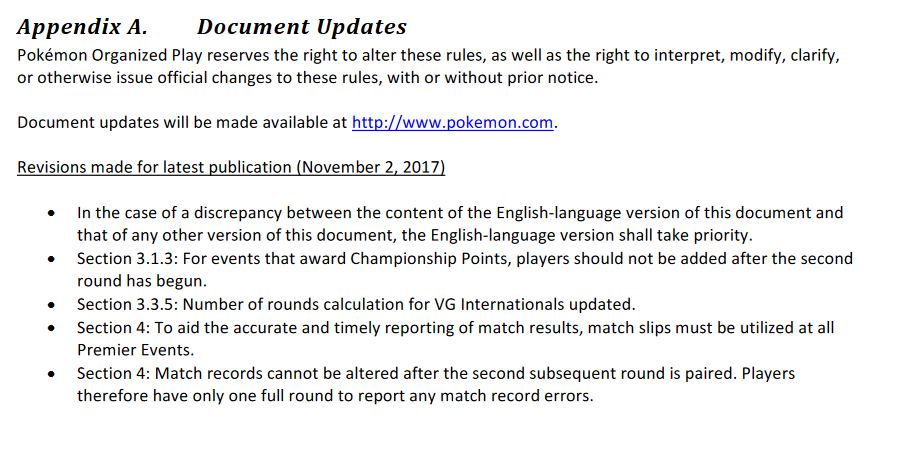 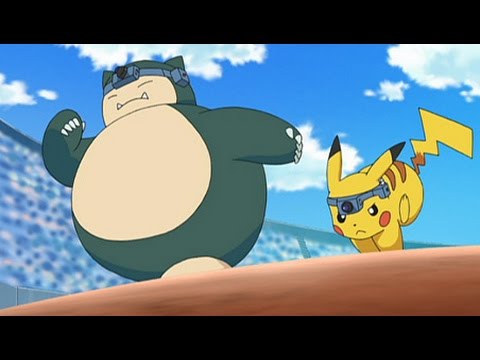 *The Appendix’s listed changes are actually not that major, but worth keeping in mind should you either A) hope to show up to a tournament super-late; or B) suffer an incorrectly-recorded match result.

*For Tournament Organizers, the mandating of match slips at “all” Premier Events just seems really bizarre, and perhaps a little reactionary. That’s a lot of excess paper for things like League Challenges and League Cups, so I wouldn’t be surprised if some events don’t follow this rule 100%. Of course it’s always best practice to follow the rules, but if I ever went to a small event and the organizer wasn’t doing match slips…I really wouldn’t care or be offended. 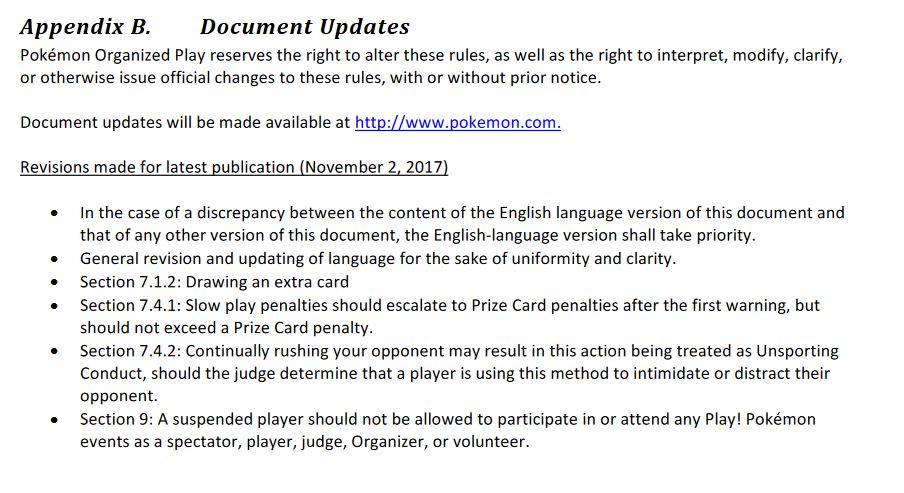 *7.1.2, drawing an extra card now requires that you shuffle the deck when it happens, and also carries with it a suggested prize penalty! This is apparently the official Pokemon people answering our cries and frustration over a very old legacy ruling on multiple fronts:

A. “Reveal and replace” never made much sense when decks were supposed to be random;
B. Regardless of the error being a mistake or not, knowing the top card can be a HUGE advantage!

So now you know the reasoning behind the change. What are the actually important takeaways from this major change?

* Beyond drawing extra cards, the only important thing we have in the Appendix is some minor tinkering with stalling and rushing. Basically, both slow play and rushing are considered bad, and either can escalate to being unsporting conduct. However, when dealing with your run-of-the-mill new/casual player Slowpoke, who’s just an honest but naturally slow person, the max they’ll get is a prize penalty.

After today’s extensive review of the new rules changes, I hope I’ve helped shed light to players, judges, and even tournament organizers! It’s been a while since I’ve seen so many major developments drop on us so suddenly, and I hope you’re all reasonably prepared for these to be implemented at your next tournament.