Today’s topic is all about a certain rule: the “prizes must be face down” rule we’re greeted with at the start of each game. I’ll explain the rule, discuss why it should be changed, offer a replacement rule, discuss why the rule change would be good, and then end with some possible alternatives to the proposed change. I hope that me explaining my thoughts will not only get some of you to agree with me; I also hope that this post encourages you guys to be on the lookout for changes you want!

“Prize Cards: Each player has their own Prize cards. Prize cards are 6 cards that each player sets aside, face down, from their own deck while setting up to play. These cards are chosen randomly, and neither player should know what their Prize cards are at the beginning of the game. When you Knock Out an opposing Pokémon, you take one of your Prize cards and put it into your hand. If you’re the first one to take your last Prize card, you win!” 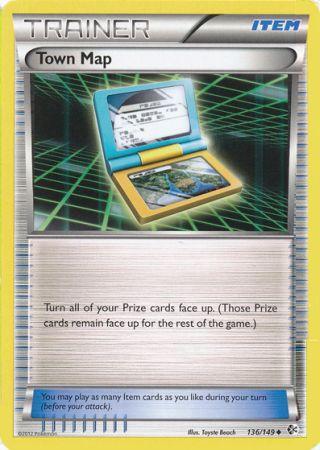 You’ve seen or done it before many times. Whether it’s in person, online, or on stream, people playing Pokémon cards are constantly figuring out their prize cards, or otherwise losing because they failed to do so. If either of those is not the case, then players are desperately hoping they draw the right prize at the right moment. Both of these aspects of the game are hassles, and serve only as distractions. For those reasons, I’m proposing a change I call the Town Map Mod:

Town Map Mod: “Prize cards should be set aside by each player, face up, from their own deck while setting up to play. These cards are chosen randomly, and stay revealed until taken.”

I know you guys very well. Of those who chose to click the link, at least 25% of you are immediately entering with a dismissive attitude:

“Why would Japan ever listen to you?”

“Why would Japan ever listen to us?”

“We’re just about to get a card that interacts with face-down Prize Cards.”

“It doesn’t make that big of a difference.”

“It’s been around since the game started.”

“[Insert some trivial complaint with an unimportant point made in my article.]”

While I won’t spend a long time addressing any of these points in particular, I will address them all (except the last one) with a simple idea:

When looking at big, sweeping game design proposals, we need to look at the motivations of Creatures Inc., and previously Pokémon Card Laboratories. What can the game creators do when it comes to the rules of their game? Pretty much whatever they want…and we need to know what changes they probably want.

1. The change would need to improve the game. On average, a better game draws more people, and the decades-long history of our hobby of choice is proof of that.

3. The change would make money. This can either be related to improving or simplifying the game, or it could be a more aesthetic change meant to sell more cards (think different rarities).

Why Making Prizes Face up Would Be a Good Idea

I’d argue that a change to prizes being face-up would do a ton of good, and achieve at least the first two of Creatures’ motivations in changing rules. Here’s why:

1. Having players keep prizes face up would improve the game. Whether it’s three Rowlet, two Frogadier, or all of your Double Colorless Energies, bad prizes can be a nightmare. Even more of a nightmare is when you can’t dig out of your already horribly unlucky situation after drawing a couple prizes. By flipping prize cards up at the start of the game, the effect of unlucky prizes is drastically reduced, thereby increasing skill and improving the game at large.

2. Keeping prizes face up simplifies the game by emphasizing quality of life over a fake skill. Anyone who’s played at a high level knows that the best players figure out their prize cards as soon as possible. This first-game search has enormous implications, from fishing out important techs to draw cards. However, despite it being a trait of skilled players to figure out their prize cards, I call it a “fake skill” because all it amounts to is a lengthy and tiring scavenger hunt. There’s no outwitting or being outwitted – only a 30-60 second game of Where’s Waldo. Flip prizes over however, and you will see a livelier first-turn search.

I highly doubt any change to this rule would make or take money away from The Pokémon Company, so instead I’ll provide a third reason why this change would be good:

3. All of the exciting secondary aspects of players placing their prize cards face up. One that immediately comes to mind is that the game becomes much easier for lay people to watch, and would eliminate any need for the “prize cam.”

Good Alternatives to Changing the Face-Down Prize Rule
Of course, there’s more than one way to skin a Skitty. Here are some other ways we could change the rules related to prize cards that don’t involve flipping them face up:

1. Allow players to look at their Face-Down Prize Cards on their first search (rulebook change). Like we talked about earlier, you can deduce your prizes just by searching your deck, so giving players this small window to figure out their prizes in less tedious ways would be immensely helpful. This option (or the one below) allow for as little impact on the way the game is played as possible.

(Also, since “shuffling Prize cards” is now a thing thanks to Gladion, you could require players to shuffle their face down prize cards after doing this.)

2. Allow players to look at their Face-Down Prize Cards once per game (tournament rules change). This is the same idea as above, only you would make it happen through tournament rules rather than a true change to the rulebook. Official Play! Pokémon tournaments have many rules patches to make quality of life better for its players, including: time limits, ways to resolve match play, ties, and judge ball. Unlike the first example, the amount of approval required by the actual creators is minimized, and could place more power in P!P and the research and development team at TPCi.

3. Print better cards than Town Map, Rotom Dex, and Gladion! The current Creatures staff seems to already realize this, but recycling old ideas from years ago works really well when done right. Gladion in some ways appears to be an attempt to relive this card from Legends Awakened: 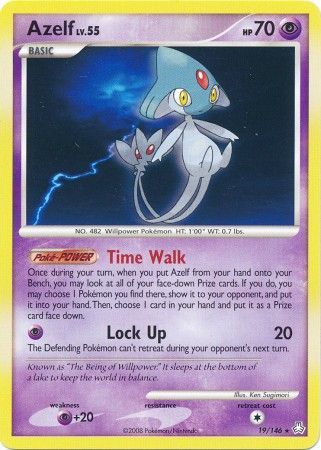 However, Azelf is better than Gladion. Why? Well, it essentially combined Gladion and Town Map into one card, letting you correct poor starting situations while at the same time “mapping” out the rest of your game. It also wasn’t a Supporter, meaning you weren’t quite as punished for playing Azelf as you would be for playing Gladion. As always, thanks for reading! Whether you love the Town Map Mod, love one of its compelling alternatives, or still prefer the status quo to any changes, I’m glad we as an international player base can talk more about rules changes. We have far fewer degrees of separation from the people who make this game than you think, and they’re listening.