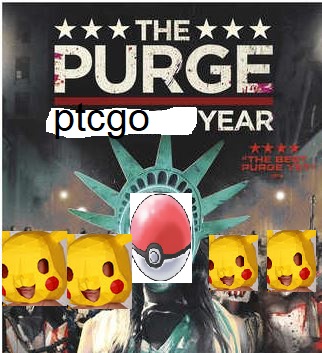 It’s been about a month after Worlds, and technically two months since the start of the season. Yet I still have an absurd number of old decks that need deleting on the Pokémon Trading Card Game Online program. I would like to give them all a fair shot at surviving in my cache, so today I’ll be starting a new series: the Pokémon Purge, where I take a batch of decks, give them one last shot in Expanded, and then choose whether to keep the decks or delete them for good. I will not go into too many meta decks, except off-the-wall stuff or more outdated concepts, so it should introduce you to some cool Expanded-relevant ideas. Either way, it should be a ton of fun, and maybe inspire some of you to break the format in a way I couldn’t.

As the name implies, this was either a close (if not card-for-card) copy of Grant Manley’s third place list at the 2015 U.S. National Championship. Despite being over two years old and never updated, I still barely lost to a Vespiquen deck. It might not mean much, but in an era with Oricorio and Karen, Mega Manectric “might” be able to shore up its bad previously poor Night March matchup. I will delete most other M Manectric lists I see, but not this one.

This is the deck I featured in a previous video. That deck will become much better in a couple months with the release of the new Swinub (three Retreat Cost!), so I have a good reason to keep it. 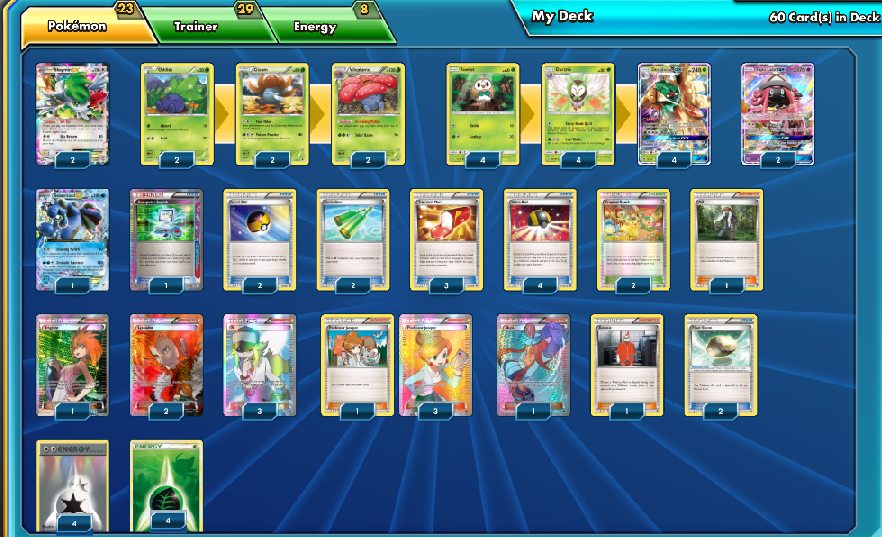 This was a pre-Collinsville experiment I had for Decidueye/Vileplume, removing Forest of Giant Plants and instead relying on hard evolutions alongside Tropical Beach for draw. It’s a little clunky, but with a couple changes I think I could give this deck an unholy revival. 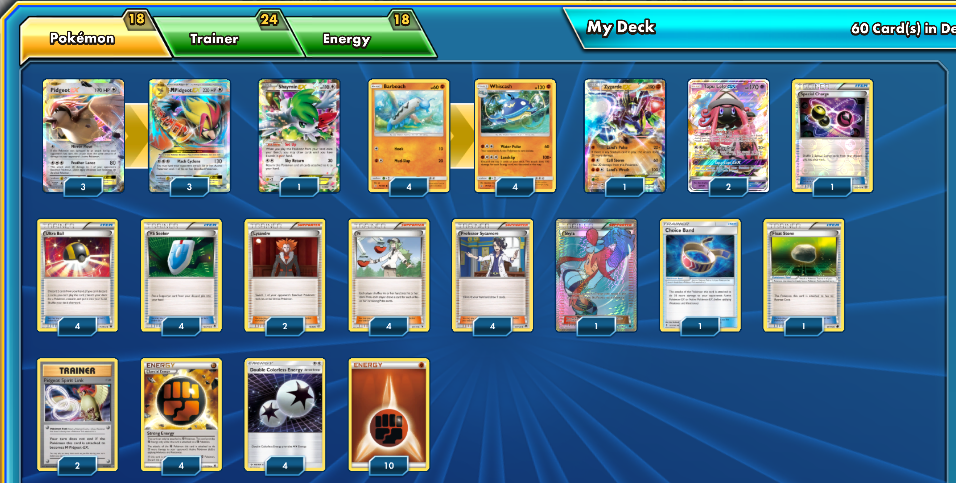 This was also for a Bad Deck Monday video, but was a non-synergetic piece of trash mostly generated by the Deck Wizard.

The idea of the Butterfree line in Expanded is interesting. Now that Forest of Giant Plants is banned, the Adaptive Evolution Ability is the exclusive means by which you can evolve into a Grass Stage Two by the first turn.

Unfortunately, most Butterfree cards aren’t that good, so at the time I made this deck, the bug’s sole purpose was to be a fast way for Miltank to deal big Damage turn one via the Powerful Friends Attack. There have since been two more Butterfree cards released, but they’re all interchangeable in a deck like this.

The list is horrendously outdated, but even if it were optimized through Burning Shadows I doubt it would be enough to make it a good deck. This list stands no chance to survive, but it would make a great choice in case you’re trying to complete a Grass Evolution challenge on PTCGO!

Butterfree1 was an accidental cloning, so it needed to be deleted from the start.

This was…a thing. I’m not sure if I could call it a deck – perhaps an impulse at best. Whatever this started out as, it never really looked that great at its finishing point. Perhaps an M Charizard EX deck isn’t that unreasonable now that Kiawe is in the format. Regardless, this deck as it currently exists doesn’t deserve to live.

Similar to the Grant Manley Manectric above, this was also a “rely-on-Manectric-but-crutch-with-a-neat-secondary-attacker” concept, only this time the secondary attacker is Primal Groudon EX. Primal Groudon actually cleaned up a lot of the matchups Manectric seemed to struggle against, but it was definitely clunky and ultimately scrapped. While I have made a mental note of Maxie’s/Groudon being a potentially viable option in the right deck, this list brings few unique offerings to the table and so will be scrapped. 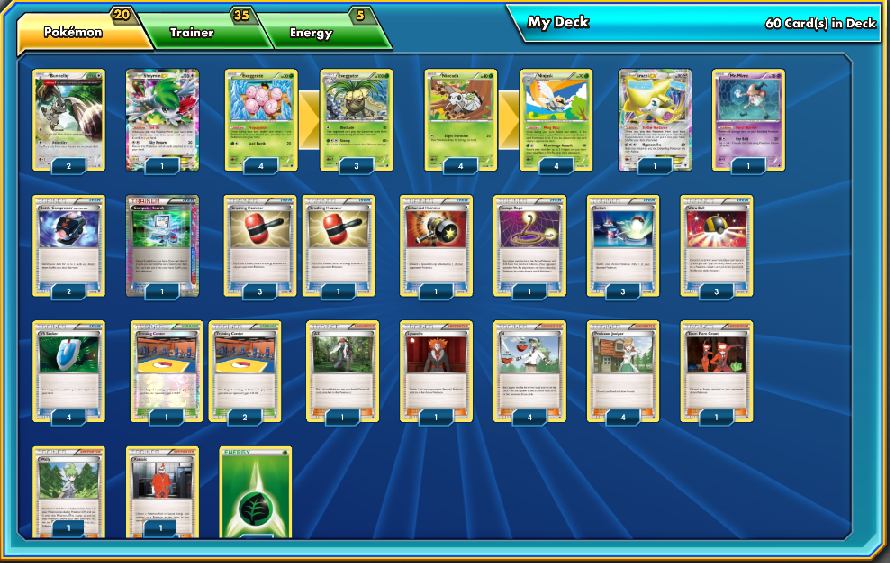 This…I love this deck. It needs a ton of updates, but Ninjask/Exeggutor could easily join the ranks of toxic decks such as Sylveon, Wailord, and Durant. In this concept, you rely on a slow, brutal combination of Ninjask for chipping away at the deck, Exeggutor to lock down an otherwise great hand, and then Bunnelby PRC for closing deck-out.

If you play this list as-is, it will probably lose a ton, and of the games it does win you will likely only be off a card or two from decking out yourself. But I would add all of the great new cards to come out since Roaring Skies, including Guzma, Brigette, and especially Team Rocket’s Handiwork. There might even be a place for Delinquent here!

This was a Fairy/Dragon Evolution deck with zero Energy or any other method of winning. Its sole purpose was to give me lots of Evolutions toward the “Put 10 Fairy/Dragon Pokémon into play” challenges I had on queue – methods by which to get free stuff on PTCGO.

Since there’s no use for a deck like this anymore, I think it’s time to put the garbage…in the dump.

Immediately when Ancient Origins came out, I sought to make a deck that would spam Hex Maniac into oblivion. Enter Hex Lock: a unique agro deck centered entirely around playing Hex Maniac every turn (with limited exception). I also ran a few Xerosics so as to throw off Seismitoad decks, which would otherwise be unwinnable.

Unfortunately, “unwinnable” appeared to be a highly applicable word to just about every other matchup with Hex Lock. I dropped the idea, and after dealing out a couple games of it in the modern era, will abandon it for now. 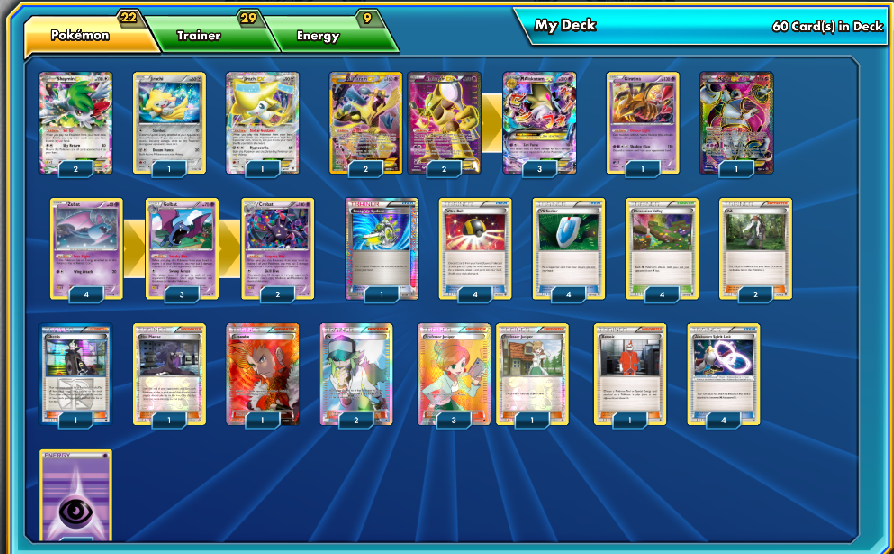 I think it’s fair to say that since Sun and Moon came out, each new set has had a new deck emerge as the “best in format.” However, nothing was as dominant or as scary as Decidueye/Vileplume’s reign prior to Guardians Rising, and so the metagame was trending in an unhealthy direction. Enter Alakazam/Crobat, an idea that had a pretty decent Decidueye matchup, but is by no means equipped to handle a format with Garbodor. The second game I dealt with it showed as much, meaning it’s time to let go of this iteration of Alakazam, even if there is some potential to be found in it later. 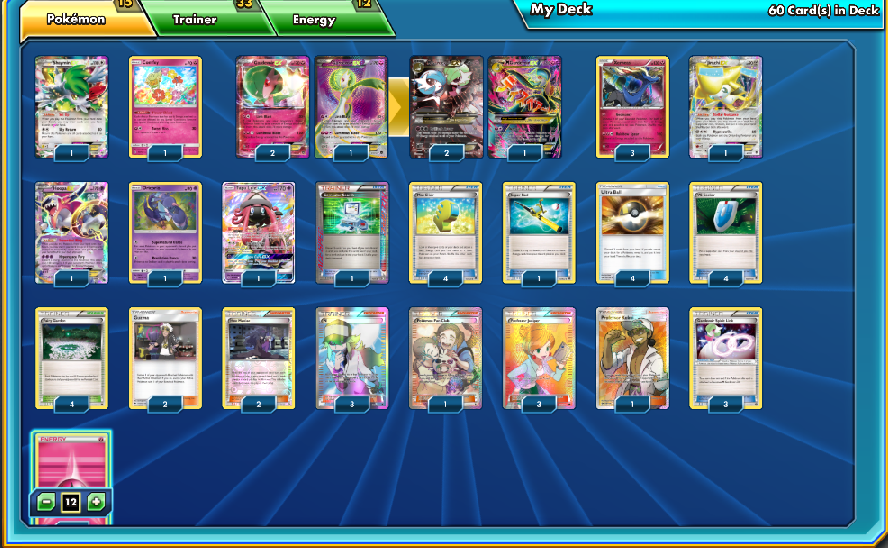 The first and perhaps only list on the chopping block that’s 100% up to date with Burning Shadows. Truthfully I’m unsure if this deck has any good matchups, but it has a less common approach (read: slow) to winning games in the current ultra-fast Expanded format, so it brings something to my deck arsenal other decks don’t. 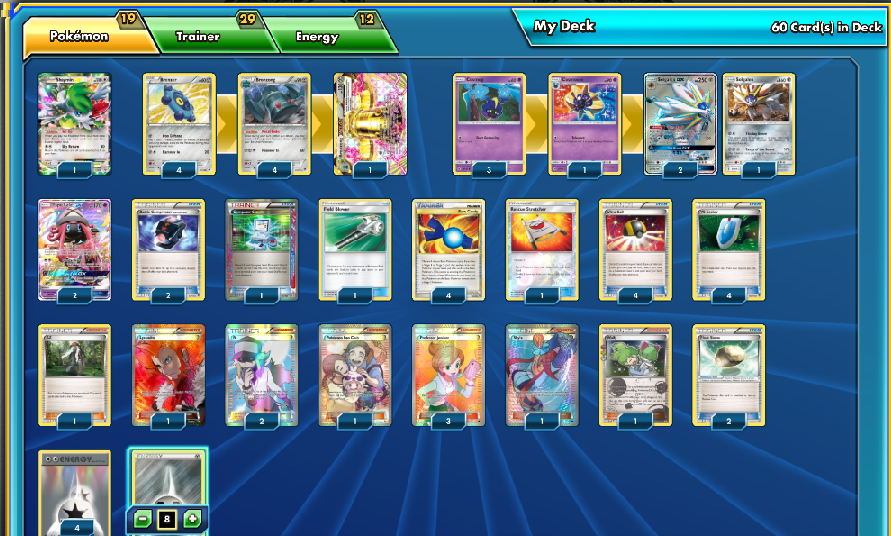 Bronzong/Solgaleo was an idea briefly played around with by Andrew Wamboldt. The list needs some tweaks to adapt to Burning Shadows, but the list deals out well and I want at least a couple Bronzong decks in my Expanded library.

A half-baked idea I had about destroying an opponent’s opening hand when going second:

1. Use Red Card
2. Play a Stadium and Delinquent
3. Either use or copy Whiny Voice

It has a ton of neat aspects and could probably be reimagined by some clever deckbuilder, but the current version is just awful. Couldn’t win a game when I made it, and can’t win a game now! 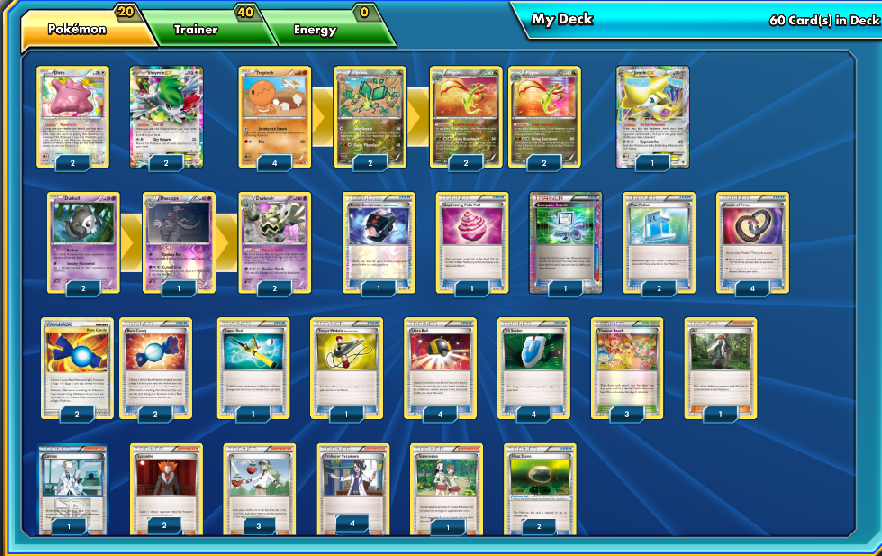 I’ve been messing around with Flygon variants ever since the card first came out. I never made a deep run at a big tournament with it, or even became synonymous with the card, but it’s been a favorite all the way back to the days of PlayTCG.me. This list was a particularly bad take on the card; a gimmick to see if I could pull it off with zero energy. I could win some games, but not many, and so it fell to the wayside.

Normal lists run Double Colorless Energy and Accelgor. I don’t know how much I like Deck and Cover over just Tropical Beaching as many times as possible and then closing with a big attacker, but this must be updated and kept around. If I could call Brilliant Arrow a “unique” win condition, then the Flygon family of decks is beyond unique.

Verdict: Saved (but desperately needs to be made into a good list)

One of my bad habits while having fun on PTCGO is cloning decks from formats and putting them into places they shouldn’t be. Obviously this is a very old list, and obviously it’s very bad as-is. Thanks to Dragon Call Gabite, Garchomp DRX is still among the most consistent Stage Two decks in the game, but it still isn’t that impressive a deck. For now I’m going to delete this, even though I can envision myself remaking it at a later point in time.

Nothing to see here – just a cute idea I threw together for fun when Evolutions first came out. Figured you might like to see what a new-age Haymaker would look like, but it’s obviously unplayable.

Verdict: Purged harder than the most violent scene in any of the Purge movies 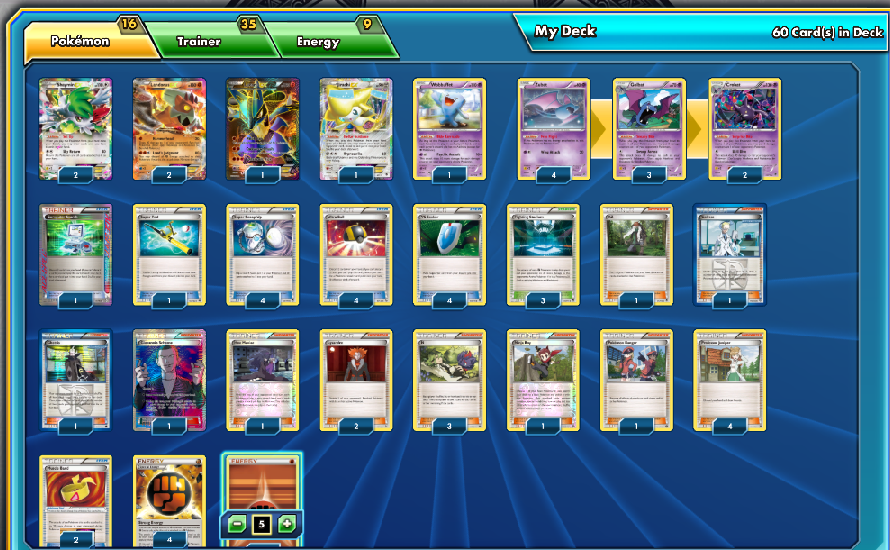 Same song; same dance. While many of the original features of the Landybats build need updating (especially that Stadium), it’s a special member of the spread deck family that needs to be preserved. Should the absolute right metagame come along, it could be pretty decent!

Verdict: Saved past its expiration date 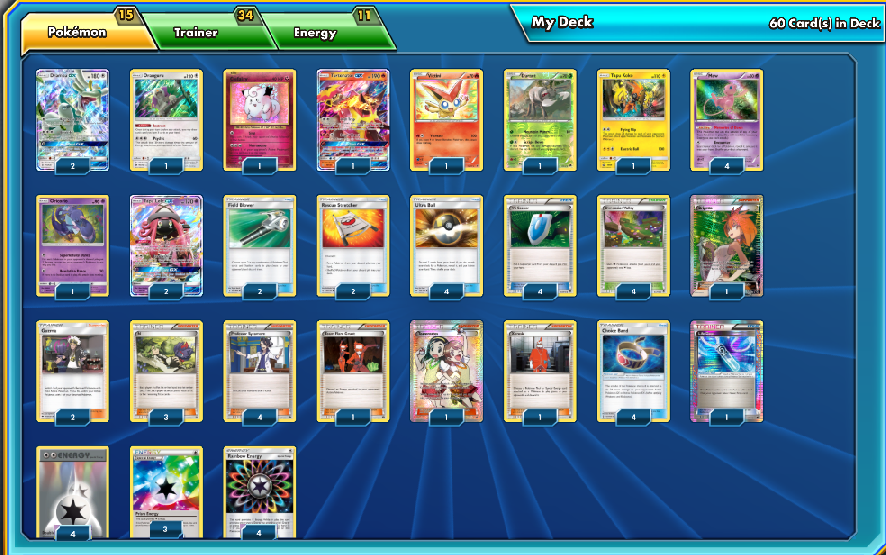 The final deck that was on the chopping block for today’s Pokémon Purge is a goofy Mew FCO tech deck I recently made, and I honestly consider this a high-note for an article about otherwise awful ideas. With a few tweaks this could convincingly beat many well-established decks. I have a lot of work before this could even hope to be a threat for the upcoming Regionals, but I’m excited to no end about its possibilities, which are technically infinite.

Verdict: Saved like a first class child on the Titanic

I hope you had as much fun reading this as I did writing it! I hope to make this a series until I’ve deleted all of the overly bad decks in my profile, so for now I’d like to tease you guys with just some of the lists we’ll cover next time:

*A Durant with a few screws loose